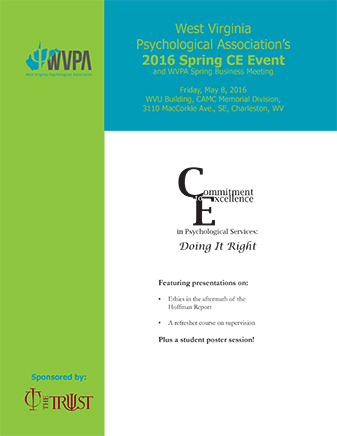 Information for ethics session on the Hoffman Report

Hi to all who plan to attend the Ethics program at the upcoming Spring Event.  As you may have gathered from the description in the Spring Event brochure,  the focus of this program will be ethical issues and associated “ripples” that emanated from the Independent Report produced by David Hoffman and his associates, commonly referred to as “the Hoffman report.”   As the chair/moderator/ringmaster of the morning’s festivities, I’m hopeful that it will prove to be an interesting and thought provoking program- our distinguished panelists (Drs. John Linton, Jack Berkley and Patrick Kerr) each will  offer a unique perspective and focus for his part of the program, and there will be significant time devoted to questions and discussion.

I’m sure that all of you are familiar in at least a general way with the issues that prompted APA to solicit the Hoffman Report, and perhaps have some familiarity with its contents.   What you may not be as familiar with are the various controversies that have erupted within APA since the report’s release.  While I plan, as my part of the panel, to summarize much of this material,  our time will be limited. So,  I thought you might find it interesting or informative to read through, prior to the Spring Event, some materials that have been generated by key voices in this intense professional conversation.  There is an overwhelming amount of material that has been written since the report in the form of emails, articles, essays, commentaries, etc.  The two primary pieces that I include here are not intended to be representative of all of the controversies, or of all of the opinions expressed about those controversies.   Rather, in my view they capture a few of the key themes that have populated the conversation within the APA Council of Representatives’ (COR) email listserv.

At the risk of oversimplifying a bit,   I’ve attached pieces that represent the perspective of two opposing forces within APA- one attacks the IR on many grounds, while the other vehemently defends it and counters the attacks made by the first group.  As you will see, there are charges, countercharges, and claims of varying kinds made by both sides.   The first piece is a challenge to the IR, written by psychologists who were involved in the PENS report, and who were prominently named and discussed in the report.  They claim that Hoffman misunderstands military psychology, misrepresents policies in place at the time of the PENS report, and generally Hoffman had an agenda that he set out to support, rather than conducting a fair and thorough investigation.  Many of the supporters of this perspective have voiced similar comments in other venues,  and have further charged that Hoffman did not allow those named in the report to challenge what saw as mischaracterizations of their positions or quoting them out of context.

The second piece is authored by two of the active challengers of what was the status quo within APA- Drs. Steven Reisner and Stephen Soldz.  They, along with Dr. Jean Maria Arrigo (who was the only non-military psychologist directly involved with the PENS report) and others, helped drive the initiation of the Hoffman report in the first place, and they have been active defenders of its conclusions and the resulting actions taken by the COR, while remaining critical of what they see as a too limited set of internal actions by APA in the wake of the report.

A few facts about the report and its aftermath

For those who might like to read through the IR itself (or the Executive Summary, which makes up the first substantive section of the report), or review the range of actions taken by APA related to the report, I encourage you to go to the following website:

I think it’ll be an interesting and lively program!   I hope to see many of you there…..